The mechanical structure of the frozen meat slicer

The mechanical structure of the frozen meat slicer

Frozen meat slicer is mainly used for slicing, shredding and dicing meat and other materials with certain strength and elasticity. It is widely used in meat processing places such as hotels, canteens, and meat processing plants. What is the structure of the lack of common food processing equipment?

The cutting mechanism is the main working mechanism of the machine. Because the texture of fresh meat is soft and the muscle fibers are not easy to cut, it is not suitable to use the rotary blade used on the vegetable and fruit cutting machine. This type of meat cutting machine generally uses a cutting knife set composed of coaxial circular blades, which is a biaxial cutting. Combination knife set.

The two sets of circular blades of the frozen meat slicer knife set are parallel in the axial direction. The blades are staggered with a small amount of misalignment. Each pair of misaligned circular blades forms a set of cutting pairs. The two sets of blades are driven by gears on the drive shaft. Rotate the knife groups on the two shafts to each other, which can facilitate the feeding and achieve the purpose of automatic cutting. The thickness of the meat slice is ensured by the gap between the circular blades, and this gap is pressed between each circular blade Determined by the thickness of the gasket.

Understanding the structure of the frozen meat slicer is helpful for using it to cut mutton rolls in the future, and because of its advantages, it also saves a lot of time when cutting mutton rolls and gives full play to its advantages. 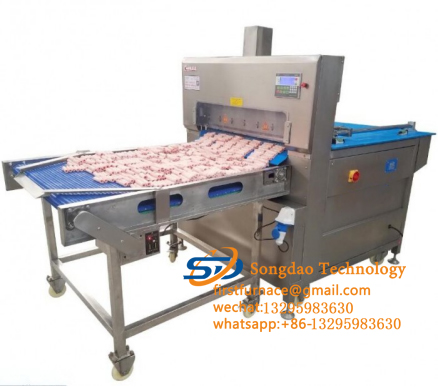