2. The cutting machine is the main working mechanism of the beef and mutton slicer. Since the texture of fresh meat is soft and the muscle fibers are not easy to cut, a cutting knife group composed of coaxial circular blades is required, which is a dual-axis opposite cutting knife group.

3. The two sets of circular blades of the cutter group are parallel along the axial direction. The blades are staggered with each other and have a small amount of staggered. Each pair of staggered circular blades forms a set of cutting pairs. The upper cutter group operates in the opposite direction. The thickness of the meat slices is ensured by adjusting the gap between the round knives of the beef and mutton slicer, which in turn is determined by the thickness of the spacer pressed between each round blade. Different thicknesses of meat can be cut by replacing the spacer or by replacing the entire cutting mechanism.

The basic structure of the beef and mutton slicer is mainly composed of the cutting part, that is, the blade, as well as the numerical control system, transmission mechanism and other components. Through the numerical control method, the function of the equipment to cut beef and mutton slices can be realized. Before using it, you can understand its function. structure, so that the equipment can be used more efficiently. 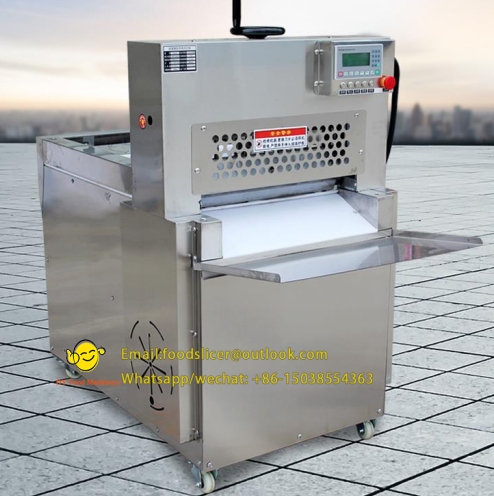