The cutting mechanism is the main working mechanism of the machine. Because the texture of fresh meat is soft and the muscle fibers are not easy to cut, it is not suitable to use the rotary blades used in vegetable and fruit cutting machines. Such meat cutting machines generally use a cutting blade set composed of coaxial circular blades, which is a dual-axis cutting. Combination knife set.

The two sets of circular blades of the knife set of the frozen meat slicer are parallel along the axial direction, the blades are staggered with each other, and there is a small amount of staggered insertion. Each pair of staggered circular blades forms a set of cutting pairs. The knife groups on the two shafts are rotated in opposite directions, which not only facilitates feeding, but also achieves the purpose of automatic cutting. The thickness of the meat slices is guaranteed by the gap between the round blades, which is pressed between each round blade determined by the thickness of the gasket. 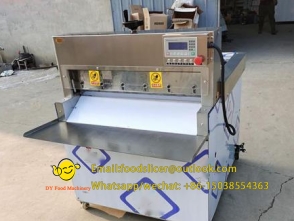